The speedway hosts on-track racing including the 96th annual Loudon Classic – the longest-running motorcycle race in the United States – and the new American Flat Track Laconia Short Track event, plus all new camping options, demo rides, a vendor mall and a plethora of entertainment, making the speedway the home base for riders visiting Laconia Motorcycle Week.

Starting on Saturday, June 8 and running through Sunday, June 16, the speedway will be the hub to everything motorcycle.

Put on by American Flat Track, “America’s Original Extreme Sport,” race fans have a new reason to enjoy the thrill of racing in Loudon.

So much bar-banging, tire-rubbing action will be packed onto The Flat Track when these pro riders enter the arena. AFT Twins and AFT Singles classes will compete in a full race program including heat races, semis and a main event. 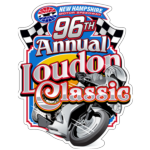 The 96th annual Loudon Classic Middleweight Grand Prix has moved back to Father’s Day, Sunday, June 16. Known as the longest-running motorcycle race in America, the Classic has been held on-site since long before the speedway was built, when it was simply a road course known as Bryar Motorsports Park.

The weekend will include the Loudon Road Race Series competing in Round Three of Championship Cup Series racing along with the Granite State Legends Cars, which are powered by motorcycle engines, and Bandoleros. Divisions include classes such as Formula 1, Formula 2, Formula 3, Formula 4, Formula 40, Formula 50, GP, Grand Prix, GTL, GTO, GTU, Motard, Moto 3, Sportsman, Superbike, Super Singles, Supersport, Super Twins and Thunderbike. The fan-favorite Supermoto event will return on Friday, June 14 as well as the ASRA Team Challenge on Saturday, June 15.