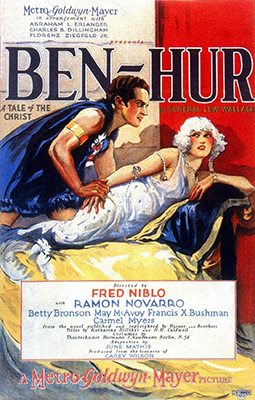 Enjoy silent film in a restored moviehouse with live musical accompaniment by Jeff Rapsis.
Starring Ramon Novarro & Francis X. Bushman. Just in time for Easter! In the Holy Land, a Jewish prince is enslaved by the occupying Romans; inspired by encounters with Jesus, he lives to seek justice. Based on the classic 19th century historical novel by Col. Lew Wallace. One of the great religious epics of Hollywood’s silent film era, including a legendary chariot race that’s lost none of its power to thrill.